In Vermont, Becca Balint’s Congress run is inspired by her Holocaust survivor


JTA — Becca Balint threw her palms up to her cheeks, mimicking her Holocaust survivor father’s horror when he learned the mailman was friendly.

“He was very, very anxious that the postmaster seemed to know a whole lot about my life and other streets that I lived on,” she said, describing her move to Brattleboro, Vermont, about 15 years ago.

Perched on her porch sofa, Balint leaned into the Zoom camera. “And the letter carrier came by and, you know, he said, ‘Oh my gosh, like, how do you do this? How do you live in a small town where everybody knows your business?’”

Balint, 54, the Democratic nominee for Vermont’s single seat in the US House of Representatives, is running a campaign at once defined by her family’s Holocaust experience and seeking to move beyond it.

If she’s elected (and she likely will be in a district the nonpartisan Cook Political Report has rated safe for Democrats), she will arrive with an ethos defined by the Holocaust to an extent not seen since Tom Lantos, the California Democrat who was the only survivor elected to Congress, died in office in 2008.

“What happened to my family in the Holocaust has guided me my entire adult life, it guided me towards being a compassionate person, to try to, you know, heal divisions,” she said. “This moment of watching the rise of autocrats and authoritarianism, it’s not theoretical for me. It’s impacted my family directly and [it’s important] to make that connection for people, that it’s not something that happened so long ago and it’s still impacting us now, and it can be a guidepost for how we do things in this moment.” 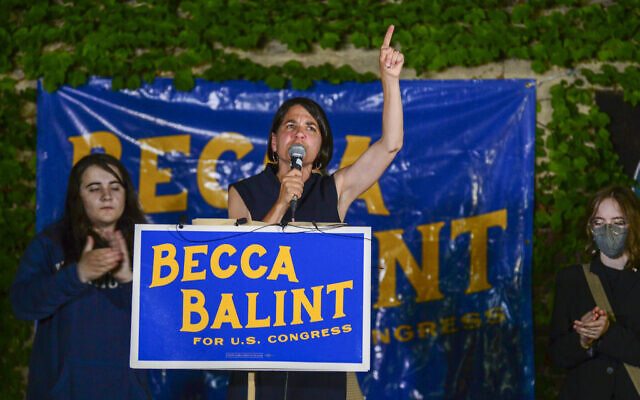 In a strikingly candid interview, Balint explained that her mother isn’t Jewish, and that she is married to Elizabeth Wohl, who also has a Jewish father and a non-Jewish mother. Balint describes her family as “Jew-ish.”

“My spiritual life is an amalgamation of Judaism, Quakerism and Buddhism — and I know some of your readers may find this uncomfortable or even offensive,” she wrote in an email on Friday, a day after the interview. “But I think it’s an important part of my story, and I’ve found this not uncommon among left-leaning Jews in Vermont.”

In the interview, Balint recalled conversations with her father as she entered public life, when she was elected to the state Senate in 2014.

“When I was first in elected office, my dad would call me and say some version of ‘Have they slit your tires yet? Have they spray painted your house?’” she said. “And that’s deep trauma, right, so I’m not trying to make light of it, but it was like, ‘Hey, when you greet me with that every time it’s a little challenging.’”

In her email the next day, she wrote, “I want to make sure that I came…

Biden Says U.S. Would Send Troops to Defend Taiwan from Chinese Invasion for

The Cherokee Nation is renewing its push for a nonvoting delegate in Congress :

SEC Doesn’t Have the Power to Remake the Law, Only Congress Can Do That: Ripple